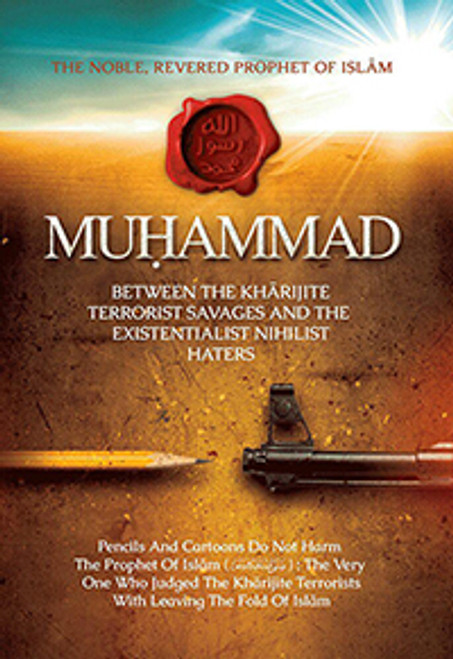 The aim is to distribute this book far and wide, so that it is clear to all people of all religions that Prophet Muhammad is free from the acts of the extremists and the attacks of the satirists.
Watch video click on link below:
https://www.youtube.com/watch?v=_NBLkTC8MiI

"Speaking in relation to the terrorist attacks which took place in France on 7th January 2015, Shaykh ‘Ubayd al-Jabiri said, “I advise the [Imaams} who give sermons, the teachers, the lecturers and Muslim journalists to unite upon a single word and it is: To openly announce [their] disavowal and innocence from this action and other action of anarchy… The people of Sunnah hold it as their religion before Allaah that in the lands of Europe, America, and other non-Muslim lands besides them in which they have settled there is a covenant, a contract [binding upon them].  Hence, they must not violate it [through treachery], ever.”  And speaking in defense of the Prophet Muhammad (prayers and peace be upon him) with respect to the slanderous and abusive Danish cartoons, Shaykh Rabee bin Hadee said, “Muhammad (prayers and peace be upon him ) and his rightly-guided Caliphs and his noble Companions did not erect factories for the manufacture of elementary weapons such as sword adn spears, let alone atomic bombs and missiles and other such wholly destructive weapons.  Muhammad (prayer and peace be upon him) did not erect a single factory because he was sent as a mercy to the worlds, to guide all of mankind to that which brings them happiness in this world and afterlife.”

This book discusses the attempts of immoral  cartoonists to malign the Prophet Muhammad (prayers and peace be upon him) through satirical caricatures having no resemblance to reality.  Likewise, it discusses the ideology of the Kharijite terrorists, their remoteness from Islam and the complete innocence of the Prophet Muhammad (prayers and peace be upon him) from them and their evil ideology.  the issues of jihad and Muslim relations with non-Muslims int their countries are also discussed.  This book is for open-minded people who can see beyond media propaganda and hate-mongering and wish to acquire an accurate understanding of Islam and contemporary issues of extremism and terrorism."

Muhammad Our Prophet By Darul Kitab

The Noble Prophet As A Teacher - Abu Muhammad Al-Maghribi

The Prophet Muhammad As A Husband - Abu Muhammad Al-Maghribi

The Prophet Muhammad By Umm Assad