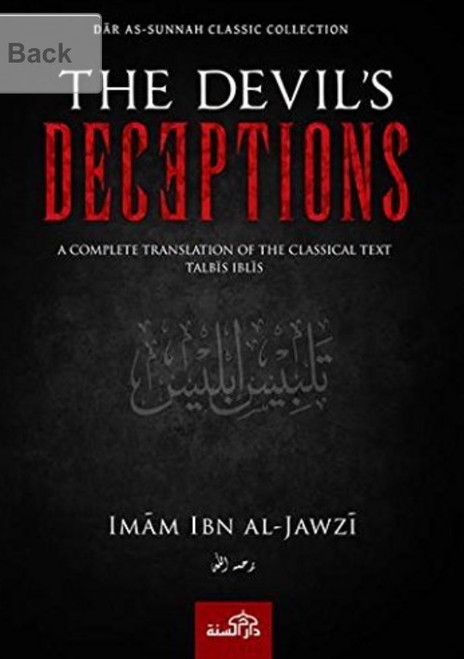 A Complete Translation of His Masterpiece `Talbis Iblis`

It is from enmity and hopelessness of the devil that his endeavour to misguide mankind from the Path of Allah will persist. This misguidance takes many shades and forms; be it from planting seeds of doubt, or giving rise to deviant ideas antithetical to the sacred teachings of Islam, and essentially becoming entangled within regressive intellectual and rhetorical discourses. The Ummah has suffered varying levels of deviation, some of which remain prevalent today, while more continue to be uncovered - and such is the impact of delusive plottings of the devil and his allies.

This book is the sixth instalment from Dar as-Sunnah of the illustrious Imam, Abu'l-Faraj Ibn Jawzi. Being a complete translation of his well-known and prized work, Ibn Jawzi enumerates within it, many of the mechanisms and modus operandi used by the devil in deceiving and leading mankind away from the Straight Path. It is of particular value and importance because only by unearthing and accentuating some of the traps of the devil, can mankind avoid them as well as navigate others away from falling prey to his harm.

Speaking about the devil and his plotting, the author wrote that, "he was only able to do so while creeping during the night of ignorance. Had the dawn of knowledge shone on him, he would have been exposed. Thus I decided to warn from his plots... for identifying evil is a form of warning from it."

This translation of Tablees Iblees will provide important analysis in developing self-awareness and critical thinking to ward off many deceptions of the devil, which have plagued mankind from the time of Adam. For such reasons alone, this work is a valuable addition to the scholarly discourse it presents to the English speaking world.

At Their Feet Piety Towards Parents By Ibn Al-Jawzi

Sketches Of Fools And Simpletons By Imam Ibn Al-Jawzi