Perfect Soloutions From The Qur'aan For Some Of The World's Greatest Problems" From The Writings Of Two Eminent Scholars Of Tafseer:Abdur Rahman As-Sa'dee & Muhammad Al-Ameen Ash-Shinqeeti 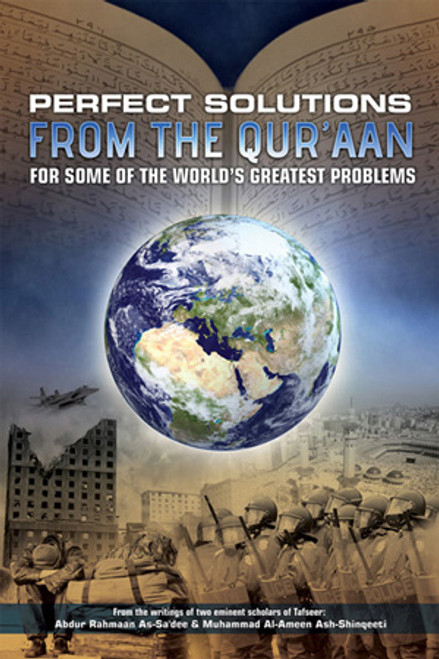 Perfect Soloutions From The Qur'aan For Some Of The World's Greatest Problems" From The Writings Of Two Eminent Scholars Of Tafseer:Abdur Rahman As-Sa'dee & Muhammad Al-Ameen Ash-Shinqeeti

The Number Of Books:1 Size 6X9 / Pgs.132 Publisher:Authentic Statements Publications
“There is no path to righteousness, correctness, happiness and success for humanity in this world or the hereafter except by following this religion and holding fast to its direction and guidance. No one can try to doubt this for verily, in the era of the rightly guided caliphs and righteous kings, when this nation was guided by its (the Quran’s) knowledge, direction and its cultivation for the individual and community, their worldly situation was correct and good just as their religious practice was. So they became the loftiest exemplary model regarding power, might, honor, justice, mercy and all perfect qualities attainable by humanity. Then, afterwards, when they neglected its factual and practical knowledge, they faltered and fell apart and have not ceased to be in a state of decrease, weakness and humiliation until they review and retake their religion. In contrast to that, from the most astonishing of matters, yet not strange, is that despite the rise of the other nations in these times as regards astonishing industrial production, miraculous inventions, and awesome power, they do not increase in anything but misery. This is to the extent that their civilization, although they are amazed by it and it is submitted to by other nations, is under the threat of total destruction at all times.” (As-Sa’dee)

Lessons From Allah In The Qur'aan-Shaykh Muhammad Al-Uthaymeen

The Perfect Solution From The Quran For Some Of The World's Greatest Problems P1 - 3: Umar Quinn