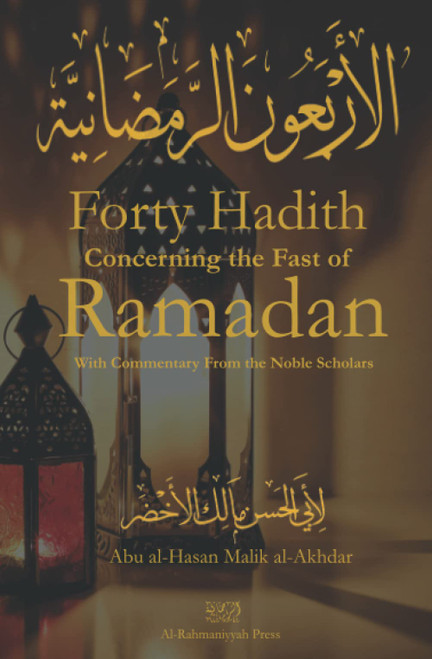 Before the reader is a collection of forty authentic Prophetic traditions concerning the fast of Ramadan, with brief commentary from the noble scholars of Islam. This is in keeping with the longstanding tradition of the muhaddithun collecting forty hadiths from the Messenger of Allah on various subjects.

Concerning this tradition, Hafiz al-Nawawi wrote in the introduction to his Forty Hadith, “The religious scholars, may Allah be pleased with them, have composed countles works in this field. The first one I have known to do so was ‘Abd Allah b. al-Mubarak, followed by the rabbani scholar Muhammad b. Aslam al-Tusi, followed by Al-Hasan b. Sufiyan al-Nasa’i, Abu Bakr al-Ajurri, Abu-Bakr Mubammad b. Ibrahim al-Asfahani, al-Daraqutni, al-Hakim, Abu Nu’aym, Abu ‘Abd al-Rahman al-Sulami, Abu Sa’id al-Malini, Abu ‘Uthman al-Sabuni, ‘Abd Allah b. Muhammad al-Ansari, Abu Bakr al-Bayhaqi, and inumerable others, from the earlier and later scholars.”

This treatise covers several important topics: beginning the fast with the sighting of the new moon, making intentions to fast, eating the suhur meal, guarding one’s tongue during the fast, hastening to break the fast, etc.

Some Examples From The Prophet-Abul Hasan Malik al-Akhdar

The Book Of Tawhid By Imam Muhammad B.Abdil-Wahhab Compiled With Textbook Format By Uways At-Taweel